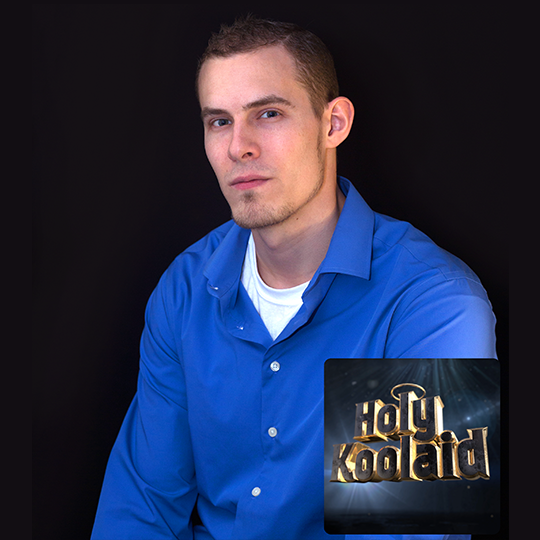 Thomas Westbrook is the founder of Holy Koolaid LLC – a pro-science/anti-cult organization with a weekly YouTube show. He’s a world traveler & autodidact who grew up in a former Soviet, Muslim county and speaks 3 languages fluently. He graduated with honors from Texas A&M with a double major in International Studies & Russian and a Political Science concentration. He worked in IT for 5 years as a security administrator & web developer while simultaneously working on his own tech startup ideas before becoming a full-time media producer, science communicator, and secular activist. He’s a board member of the Atheist Community of Tulsa, co-host of The Here and How Podcast along with Rachel Oates and Rationality Rules, and creator of the Science-loving Skeptics Facebook group.

“I’m not afraid to question the status quo, but try to do it with tongue-in-cheek humor. I don’t like to live under a cloud of hate, but I despise pseudoscience, cults (and people/organizations that use cult-like manipulation tactics), and superstition. I believe in freedom of and from religion and the separation of church and state. The universe is not only knowable, but it’s too magnificent not to explore it. So let’s dare to be curious!”

As a former missionary kid, youth pastor, church camp counselor, and worship leader, Thomas was a closeted atheist for two years before founding Holy Koolaid in 2015 out of frustration over the negative stigma displayed towards atheists. It was Thomas’ way of normalizing atheism while fighting against cult-like manipulation tactics that stymie curiosity, growth, and exploration. At Holy Koolaid, curiosity is king and no idea is sacred because truth withstands scrutiny. Thomas has brutally gone after everyone from fundamentalist preachers and cult leaders, to psychic vultures preying on the vulnerable, to pseudoscience-peddling snake oil salesmen hawking their wares to desperate cancer patients. In addition to garnering over 70,000 subscribers and 6.8 million views on Holy Koolaid, Thomas has made dozens of media appearances on other channels, podcasts, and blogs and put together a community of atheist/skeptic YouTubers to encourage mentoring/collaboration.